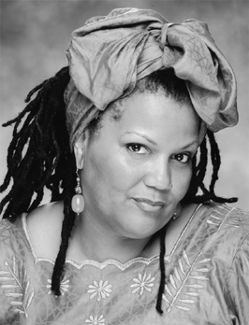 For over five decades, Kay Lawal has performed around the world on stages from New York to Edinburgh, Scotland, Amsterdam to… Kenya. Blending Artistry with Activism, Ms. Lawal- Muhammad is a founding director of Actors against Drugs, Kuumba Women’s Theatre Company, and WombWork Productions Inc.  A dramatic as well as Comedic Performer, Ms. Lawal-Muhammad has appeared in the Emmy award-winning episode of the television series “Homicide.” Other television appearances include “American Most Wanted”, “The Corner” and the “Wire.” One of Ms. Lawal-Muhammad’s most acclaimed productions was her long running comic partnership with the provocative comedy team, “The Thunder Thigh Revue” starring Artist Joyce Scott that toured the United States, Canada and Europe.

A good laugh never hurt anyone. In fact, humor actually help promote healing and productivity. Through her “Kayotic Komedy” she takes the title… “Laugh Therapist”.  Kay lets loose a unique brand of humor, born of her personal struggles. Tapping universal themes, she invites audiences in on the healing process. She speaks from the heart. She shows audiences how to laugh through ups and downs. Timing is everything and Kay’s is impeccable!!

Known as “Mama Kay” to the thousands of youth and families which have had life-changing experiences through the work of WombWork Productions, Ms. Lawal serves as Artistic Director of the production company. Pioneering a three-tier mentoring process through the production companies three performance ensembles, Nu World Art Ensemble (ages 18 and up), Nu Generation Art Ensemble (13-17) and Next Generation Art Ensemble (5-12 ).Mama Kay now has a film director credit added to her resume. Mama Kay is an official Rites of Passage Facilitator and a Master Virtues Facilitator (Virtues Project ™.)