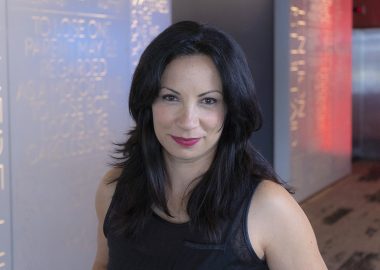 STEPHANIE YBARRA is in her first season as Artistic Director for Baltimore Center Stage and brings to her new home twenty years of experience at theaters of all sizes across the United States. Most recently, she served as Director of Special Artistic Projects at The Public Theater in New York, where she led the Mobile Unit and Public Forum programs. Additionally, Stephanie is in her fourth year as Producer’s Lab Liaison for Women’s Project Theater, of which she is an alum; and she just concluded her role as both Curator and Casting Director for Two River Theater’s Crossing Borders Festival of Latinx plays. Her career started in her home state of Texas, working with Dallas Theater Center and Dallas Children’s Theater. She then fled to cooler climates, spending time as the Deputy Director of Program Operations for Citizen Schools, a national after school program based in Boston. Rounding out her East Coast travels, Stephanie served as Interim General Manager of Two River Theater Company and Associate Managing Director of New Play Development for Yale Repertory Theater and Yale School of Drama. Ultimately, Stephanie landed in NYC, where she made her artistic producing debut with the original production of Tarell Alvin McCraney’s The Brothers Size, for which she received the inaugural Producer’s Chair Award from the Foundry Theater.

She went on to serve as the first Producing Director for Playwrights Realm and Producing Artistic Director for the Cherry Lane Theater’s Mentor Project,a program dedicated to supporting early-career playwrights. Because teaching is a hard habit to break, Stephanie repeatedly finds herself guest lecturing for artists and producing students at Julliard, NYU, and Yale School of Drama. In light of the current state of the world, she co-founded the Artists’ Anti-Racism Coalition, a grassroots effort to help the Off-Broadway community dismantle systems of exclusion and oppression. In 2012, she was awarded the Josephine Abady Award for producing from New York’s League of Professional Theatre Women, and in 2016 she received the Congressional Award for Achievement in Excellence from Zara Aina, an international nonprofit dedicated to community-engaged artmaking. For her sustained work around diversity and inclusion, Stephanie received the prestigious Nation Builder Award from the National Black Caucus of State Legislators in 2018. She holds an MFA from Yale School of Drama, and a deep belief in the power of the post-it note.