Learn all of the details in our press release.

Baltimore, MD – The nonprofit arts and culture industry generates $961.6 million in annual economic activity in the state of Maryland-supporting 25,248 full-time equivalent jobs and generating $87.4 million in local and state government revenues, according to the Arts & Economic Prosperity 5 national economic impact study. The most comprehensive economic impact study of the nonprofit arts and culture industry ever conducted in the United States, Arts & Economic Prosperity 5 was conducted by Americans for the Arts (AFTA), the nation’s leading nonprofit organization for advancing the arts and arts education. Maryland Citizens for the Arts (MCA) partnered with AFTA for the implementation of this study for the state of Maryland. 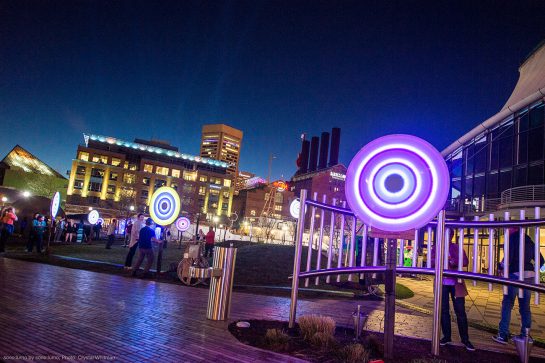 Beautiful outdoor space with funding for the arts.

Results show that nonprofit arts and culture organizations spent $511.4 million during fiscal year 2015. This spending is far-reaching: organizations pay employees, purchase supplies, contract for services and acquire assets within their community. Those dollars, in turn, generated $643.5 million in household income for local residents.

“The long-term investments made in the Maryland arts sector continues to support and sustain a creative industry which, in turn, helps to grow communities both economically and socially,” said Nicholas Cohen, Executive Director of Maryland Citizens for the Arts. “It is no coincidence that Maryland is ranked fourth in the country in per-capita arts funding and enjoys some of the most diverse and culturally significant artistic endeavors in the nation!”

“This study demonstrates that the arts are an economic and employment powerhouse both locally and across the nation,” said Robert L. Lynch, president and CEO of Americans for the Arts. “A vibrant arts and culture industry helps local businesses thrive and helps local communities become stronger and healthier places to live. Leaders who care about community and economic vitality can feel good about choosing to invest in the arts. Nationally as well as locally, the arts mean business.”

In addition to spending by organizations, the nonprofit arts and culture industry in Maryland leverages $450.2 million in event-related spending by its more than 16.3 million attendees to arts events. As a result of attending a cultural event, attendees often eat dinner in local restaurants, pay for parking, buy gifts and souvenirs, and pay a babysitter. What’s more, attendees from out of town often stay overnight in a local hotel. Non-Maryland residents comprise more than 15 percent of total attendees at Maryland arts events each year. These nonresidents spend on average nearly double that of residents (on average $22.87 per person versus $41.47 per person).

Learn all of the details in our press release.

Maryland Citizens for the Arts partnered with Americans for the Arts to create the statewide Arts & Economic Prosperity 5 study for Maryland. Maryland’s statewide study was supported by the Robert W. Deutsch Foundation. Findings from this study were gathered through information from 522 nonprofit arts and cultural organizations across the state. For Maryland’s full Arts & Economic Prosperity 5 study, visit http://mdarts.org/community/aep-5/.